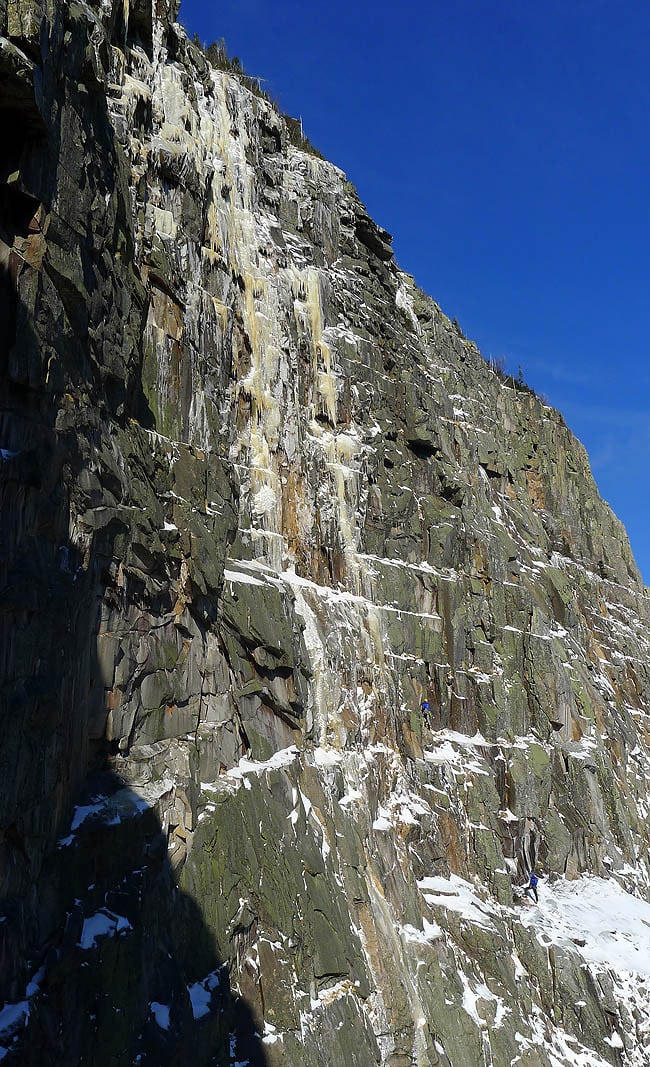 I am still getting my head around this new era we live in where someone can get out climbing, come home and.. bam! we all have pictures and a report on conditions. It is so well suited for winter climbing. An intrepid friend and reporter for the Conway Daily Sun, Eric Eisele, got out to Cannon last weekend, he posted some pictures on Facebook, made a phone call or two and next thing you know half my friends are independently arriving at the Cannon parking parking lot, before sunrise, on a Tuesday morning. What a treat!

The kind of winter climbing I get excited about tends to be slow and cold, so the more good friends around the better. I often choose to climb in a team of three despite the difficulties. You always end up following a pitch right behind  your partner, dodging missiles, or, if your seconding first, you’re nervous because you don’t want to brain your wife’s-best-friend’s-husband. Somehow that is all manageable, and forgettable, though. The things I often remember clearly about a good day of climbing tend to involve brief flashes of climbing and a lot of hanging around at belays laughing with a friend. The truth of it is our cliffs are pretty small and winter climbing is really about 70% standing around shivering – so why not plan for what you are really doing and spend that time strapped into a belay catching up with someone, who, after many other similar afternoons, should be one of your best friends?

Here are a couple of shots from some Cannon three-way action yesterday.

The Catskill's ringer, Ryan Stefiuk, leading a second pitch to a lean and mean early season Omega, with Elliot Gaddy and Micheal Wejchert. These guys aren't afraid of a little hecklin'! (Prozac is trying to come in; just to the right of Omega.) 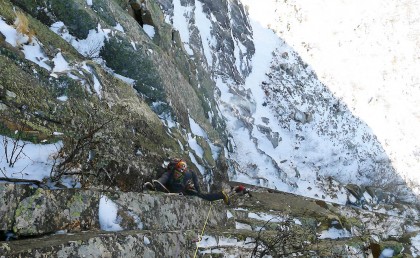 "Hey, there are some loose flakes, watch out.." Freddy Wilkinson and Matt McCormick folowing a little variaiton to the top of the first pitch of Mean Streak.

Freddy going straight through the puckerbush.

And check out this timelapse of the start of Mean Streak by Freddy Wilkinson:

The Mean Streak from Freddie Wilkinson on Vimeo.

Use Your Beater Crampons This Week