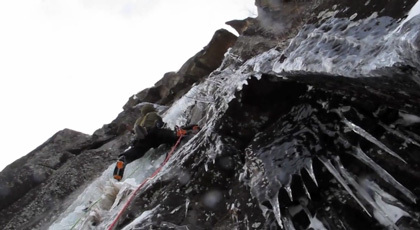 A short video about Matt Horner, Matt McCormick and I’s ascent of a route we called Endangered Species on Poke-O-Moonshine in New York’s Adirondacks. This stunning 65m strip of thin ice came in about 30′ right of the famous Gorillas in the Mist. Gorrillas is a Jeff Lowe and Ed Palin route from 1996 that has seen only one repeat, and it was that same weekend by Alex Lowe and Randy Rackliff.

We added on more pitch after the ice, the so called “Horner Corner”, and rapped off a tree on a good ledge. Good friends, Kevin Mahoney and Freddie Wilkinson, repeated the route a few weeks later and added a final pitch to the summit cone.

A little bit of video got lost exporting the file.

To the Top!
Scroll to top