There it is, it just happened.. it rained, it got cold and Cannon went off. If you just keep showing up year after year, eventually, you just might run into the conditions of a lifetime. Maybe. I didn’t show up. Kevin Mahoney and Elliot Gaddy did though; early on a sunny morning after a ridiculous rain storm.

It literally happened over night. Sunday afternoon was above freezing, but when those guys looked up at the cliff from the parking lot on a cold, clear Monday morning there was ice all the way to the ground; numerous 1000′ smears.

Now, there’s a little more to it than just showing up, as we all know. These guys were the ones that did though and they looked up again at this ridiculous looking route from the base, packs in the snow, and still decided to give it a go. This can thin out the willing pretty quickly, too. But you gotta try, especially when it might not ever be around again, and you’re actually there with a willing partner. It’s the same thing pitch by pitch and actually, truthfully, move by move. It can all seem too much when you look at it all at once, but they didn’t, and they never a had a good enough reason to turn around.

I have had a precious few days like this, we all have in our own ways, where pitch by pitch I simply cannot believe what is still happening, is still happening. It is a glorious feeling, flawlessly and safely passing pitches that just shouldn’t be there, and didn’t seem like they could be climbed. It is the beauty of ice climbing; all the million factors that had to come together to get this fleeting strip of ice where it is and where it probably shouldn’t be. I can appreciate how those boys felt up there on the wide open center of the “Big Cliff”, banging out pitches that would not be climbable even that afternoon as they rappelled; delaminated and turned to mush by the sun. But they were in a spectacular place I have never been. They were right were New England’s best ice climbers have wanted to be for generations, climbing that top to bottom strip of ice up Cannon’s Big Wall.

Congratulations guys, you sent the thing that was at the center of all this great climbing that has gone on around here over the years. I keep coming back to the feeling that everything else just seems peripheral.

But there’s more, after all that they went back Thursday and sent a line just right of Icarus, also to the top, in windy, snowy condition. Elliot slept for three hours the night before, driving to Franconia Notch after a short trip to central New York, a trip he had begun from the same parking lot three days before. That’s what it takes though, the drive to get there (no pun intended) .

It should be noted, however, that all this motivation comes at a price. After climbing Icarus, Elliot, sound asleep in a chair, got his toenails painted by a couple of friends in Madison. 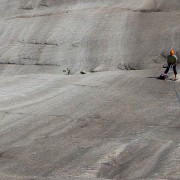 The Richey Project
Scroll to top