Leading out on the second pitch of Love Diet.

Bob Baribeau’s route, Love Diet, is incredible. All I know about the history is that he rope soloed the route in the mid 90’s, but I can imagine it might have been a lonely day.

Love Diet is on a 350′ seldom visited, beautiful and steep cliff called the Laughing Lion. The yellow drips that are the route’s second pitch hang from the left side of a twenty five foot roof. It usually takes until January to come in. Unlike a route like Dropline, where ice bonds to a vertical wall, Love Diet drips off the edge of the roof, its water droplets free-fall over a hundred feet, building up a mushroomed pedestal and dozens of icicles. On some years a continuous line of ice develops, on many years not. The top of the second pitch overhangs its base.

Its lucky we even got to the cliff that day. At 10:30 the night before, after what wasn’t our first beer, Freddy Wilkinson and I hatched a plan to try the route. We were in the middle of a 20″ snow storm and its a five mile ski out there, but that never really crossed our minds. The next morning, after digging out our respective houses, we got on the road at about a quarter to nine. After an hour’s drive to the trail head, the first few miles of skiing went smoothly, thanks to a snow machine packed and groomed trail. Once away from the Ski-Doo trail though, the snow got deep. One of us would break trail, plunging knee deep on skis, while the other would hang back and have a snack. After a ten minute break you could catch up in two minutes only to take the lead. The usual two and a half hour approach took four hours.

Somewhere along the trail, where it had seemed especially bad, we had decided that we should call the outing a cardio work out and just try and get to the cliff. Josh Hurst and Ian Austin were coming out the next day, so at least they would have a good trail and somebody would have a chance to send the route. But, after a sandwich and some hot Tang, we got psyched.

Fred sent a variation to the first pitch, called Love Diet Direct, one of three excellent NEI 5+ pitches that are within fifty feet of each other, and the only one in good condition. 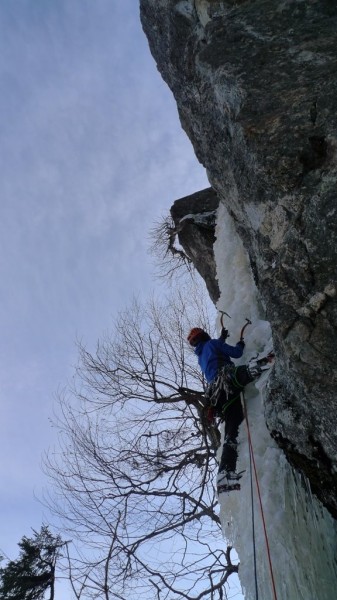 Freddy Wilkinson on the Remission part of Love Diet Direct.

The pitch is like climbing the Remission column right off the ground only to end up right in the middle of Repentance. He casually fired the candled and impossible to protect first twenty five feet of the pillar, chatting with me the whole time. When he got in the chimney I could hear him hooting with excitement over how good the pitch was.

By the time I got to the belay he had the next pitch all mapped out for me, or so we thought.

After pulling over an ice roof the climbing got dicey. It was the narrowest neck of the route, sunbaked and poorly bonded. If I hadn’t seen gear past this section of a couple of body lengths I probably wouldn’t have done it. But once past it, with some good rock gear in, the ice came back around and eventually I was able crawl into an ice cave big enough to stand in. This was an incredible position, half way out a huge roof, standing on a perfectly flat blob connected to the back side of an enormous icicle. Off to the right was nothing but air.

As I began to down climb to get back in position to finish the pitch, I could see higher up behind the enormous curtains of yellow ice. I noticed a good crack and what looked like a way to get out from higher up. After some wild climbing that sometimes resembled caving more than anything else, I found myself behind a pane of ice thirty feet higher. A few minutes of chopping and I was back out on the front side of the ice, way up high on the cliff with only fifteen feet of bombproof vertical ice between me and the trees. 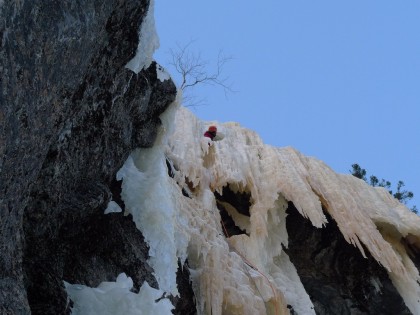 Poking my head out the freshly chopped hole high on the route.

We got back to the base of the route as it got dark and had a horrific ski out in climbing boots with fifty pound packs in deep snow. It was a beautiful night, but it went unnoticed while I was buried in a bush up to my ears in powder, not able to get up. Luckily the guy who grooms the snow machine trail passed, and by the time we got to the height of land we only had to stand there and slide the remaining few miles back to the truck. 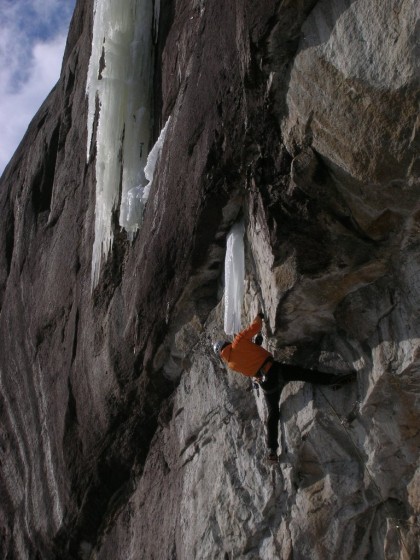 Kevin Mahoney working the 100' of M9 drytooling up to the base of the ice.

People have been looking at this route for years and and it was a multi-party effort just to get up to the ice. Dave Moore and Jay Sterner were the first, they put in an aide route with the goal of eventually reaching the ice. They ended thier line at a hanging belay roughly half way. After some hairy aid climbing and a string of hand drilled bolts, the pair left behind a perfectly bolted stretch of rock climbing and drytooling up to a chain anchor. They didn’t get out unscathed however, a RURP popped on Dave, and he took a twenty foot fall and seriously hurt his ankle, leaving Jay to carry out two backpacks while Dave slid out a couple of miles on his ass. They called their effort Borrowed Time.

Two seasons ago Doug Madara got the ball rolling again on trying to get up to the icicle. We had all been thinking about it, but it took someone like Doug to break the ice on this intimidating project. Eventually, Peter Doucette, Kevin Mahoney and I hauled a drill up to the Painted Wall to try and get all the way there. I aided and drytooled to the previous highpoint on Borrowed Time, then bolted the remaining unclimbed 50′, aiding off ice tools, to gain the ice covered ledge at the base of the free hanging pillar, and installed an anchor.

A slew of people tried this first pitch as a mixed climb that season, but tricky sequences, small footholds, hidden holds and a deep pump kept us all from climbing the pitch with no falls. Last year the ice only briefly came in, and I don’t think anyone had a chance to get on it, so when it formed this year Josh Hurst and I quickly headed out to give it a try. We had a great day in the sun, stayed relaxed and I surprised myself, sending the pitch on my third try. I was psyched, but it was still only one of two pitches.

Josh followed, almost sending it, and we reconvened at the foot wide belay ledge at the base of the icicle. Unfortunately, the ice was in awful condition. It was poorly bonded, candled, and tiered in a series of overhanging icicles and curtains; not the more solid column of two years previous. The icicle’s right hand sister flow offered the best chance, but was detached from the wall, although the climbing looked like straight forward grade 5 ice. As the sun started to set and the temperature dropped, we started to rig a rappel as the ice began to make very strange hollow, popping and creaking noises, affirming that bailing was the right decision. There was still one last option though, the only problem was it would take a bolt to get from the ledge to the first piece of gear.

After a rest day we went back out to finish off the route, this time carrying the drill. Still feeling the effects from the effort a couple of days earlier, I started hanging the draws for Josh to try and send the first pitch. When I got up to the base of the ice though, things looked different. The day before had been warm and the ice had taken a hit. The little ice ledge where we had belayed was falling apart as I swung into it. I tried to get on it one last time, high stepping my frontpoint, and a huge chunk of the ledge feel off on my other thigh, not leaving much behind. The ice above looked worse. I lowered off the pitch’s last bolt, having been within five feet of the belay.

I drove past the route yesterday morning and half of the right hand sheet had fallen off in the sun. So it goes, at least nobody got hurt. A couple of years ago we couldn’t climb the rock, but the ice looked relatively good, this year, the opposite. We’ll see what next time has to offer.

Take a look at this shot of the route from Peter Cole’s website taken in 1978, photo 2857. Look for a pair of huge icicles visible on the far right hand of the photo of the Painted Wall. Those years in the late seventies saw the biggest ice ever, and the route looks huge!

In a town surrounded by dozens of crags you only have to tell a North Conway local, “meet me at The Cliff” and they’ll know right where to go. And getting there is easy; park a few hundred feet from your route, or drive right to the top. Convenient it is, but Cathedral Ledge is also packed with more than its fair share of year round adventure. 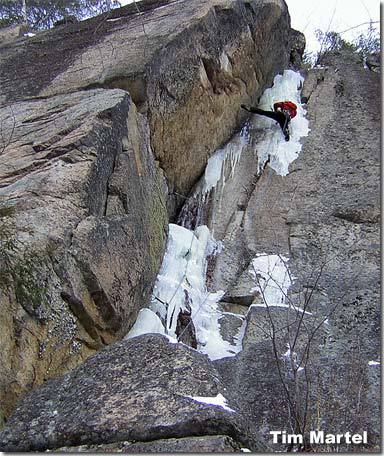 Its the hub and a better home crag couldn’t exist. Its where folks figure out how to make an anchor, handjamb, use their feet, fiddle in a nests’ of RP’s, and finally, how to go for it. The climbing is cerebral and technical in the summer and it retains those qualities throughout the winter, but with the added excitement of verglas, spindrift and the heavy metal rhythm of steep, fat, blue ice.

A long climbing history and a passionate group of devoted locals form the backdrop to the slabs and cracks of the cliff. The community is real, hardworking and littered with characters. Its a hard group to leave, and it’s open to whomever is ready to trade an ordinary existence for a climbing life in a place without ready made careers. On a summer evening after a route and after dark, you sit and have a beer in the dirt with three generations of climbers who have made similar decisions and sacrifices for this way of life. 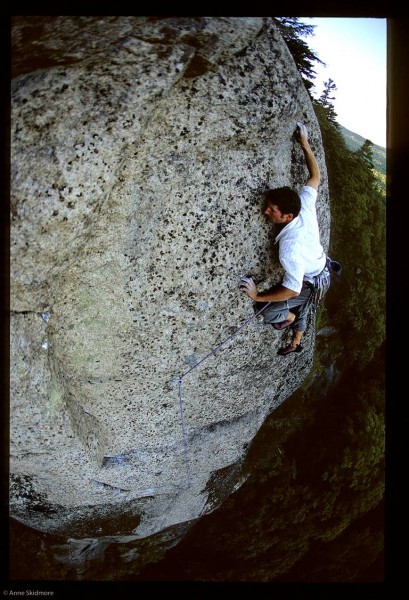 “Cathedral style” is a way we describe a type of thin, balancey, thought provoking climbing with fidgety gear and technical sequences. Its old school and usually less than vertical. But, when away on a climbing trip and a friend tells you, “don’t worry the next pitch is Cathedral style, you’ll be fine,” more than just the slow, cerebral tic-tac of Cathedral Ledge footwork comes to mind. I think of summer nights, great belay ledges and PBR in the parking lot with friends.