See a great write-up here at Neice.com, home-sweet-home for the Northeast’s winter climbing community. Doug and Alan make the glue. 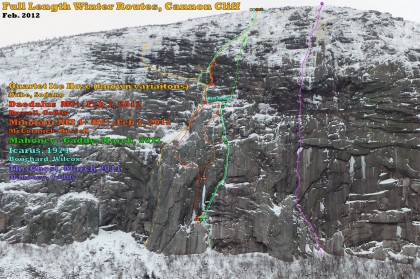 About four, maybe five, years ago Kevin Mahoney and I tried to climb a line up the right side of the Duet Butress on Cannon. I was looking at one line, he another. We ended up rambling off left over easier terrain, climbing neither. I went back a while later and took a whack at the line I wanted to do, what  I thought was the second pitch of Icarus, gave it my best, but bailed halfway up this beautiful corner. 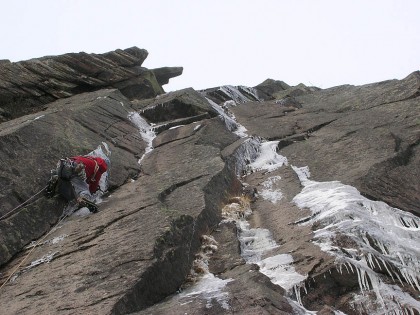 Take one, with Peter Doucette and, photo by, Silas Rossi.

Kevin went back with Elliot Gaddy last spring in incredible conditions and fired his line to the top (see photo topo, Mahoney-Gaddy).

This year, just back from a week steeped in Scotish mixed climbing, I was super keen, and a day guiding the Black Dike gave me a glimpse of the great conditions that had settled in while I was away. One smear of thin ice particularly caught my attention. 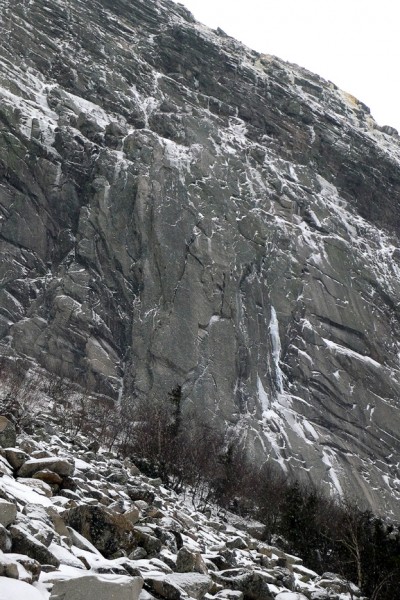 The next day was a warm one, with drizzle, but I was vibrating with energy despite of it all. Matt McCormick and I met up in the parking lot and we packed our bags slowly, unsure of what to do in the funky weather.  We broke trial, looked at corner systems, considered a few potential lines, talked about just heading back to the car but rambled on until that smear of ice came into view. It had gotten fatter, it looked protectable, we were off!

Matt tells a good story of the day on his blog (see it here), so I can consider it told. I’ll simply add two things, a quick comment and a reminiscence. First, the comment: It was a great day.  And, the reminiscence: As the pitches were strung together, and it really started to rain, I could here what my climbing partner in Scotland, Nick Bullock, said to me as I casually pointed out a rappel anchor one evening as twilight turned to darkness, “We’re going to the fucking top!”

There is another page to the story. I had really been enjoying this style of climbing; starting at the bottom of a big cliff and simply climbing to the top. The next objective was obvious, and it begun on what I thought was the second pitch of Icarus.

Icarus was the first new route to be done in the winter on Cannon (1974); that is, every other winter route is just an icy version of a summer climb. This intrigued me; it seemed special to try and free climb a route on the “Big Cliff” that was originally done in the same frozen and windy, winter world. The route’s story is legend, too: Like Icarus, Bouchard fell, breaking his ankle. He and Rick Wilcox were high on the route, but they persevered to finish their ascent on the third day, and endured a long and painful hike down.

Elliot leading the shared first pitch for all winter variations to Icarus.

From the ground, where we dropped our packs, you can’t tell much about a 3/4″ crack a pitch away, but we could see these little white dribbles oozing out at the crux. Good enough to warrent a look. From the top of the first pitch it was obvious that the crack was not only choked with good ice, but there where little dry spots for gear. It looked unbelievably perfect. If “in-ness” is a matter of degree, this pitch was pegged to the “in” end of the scale, true mixed conditions enhanced by the weather; snow, wind and spindrift.

This was something I have struggled with, particularly with this pitch- what is in? Often there is a toungue of ice spilling out from the bottom of the corner, arguably enough to warrant bringing the ice axes and crampons up the rest of the, otherwise, dry pitch. But, that never appealed to me. To look up with Elliot that day and see mixed climbing was fantastic – rock climbing it was basically out of the question. We simply needed the sharp stuff to get up it; as good of a definition of “in” as I’ve ever come up with. 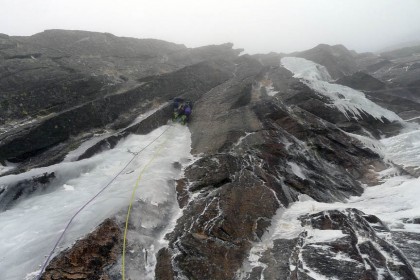 Almost every tool placement on the entire pitch was through solid ice, what had felt like M8 in slightly drier conditions, now felt like strenuous M7. I got past my highpoint, a stance below a crack pinched down too tight for picks, by pounding in a marginal piton for protection. I decided I could give-it for a body length or two, seeing the crack opened up above. A few more moves, some marginal gear, and my expectations for security were met. Gear still came slowly, but what I got was good, and the iced-up, offset crack just swallowed my picks as I swung into it. A little run-out towards the top, a spectre hook to take out the sting, and the pitch was was finished at a small stance with a rusty and flexing 1/4″ bolt and couple of other spread out pieces. I remember, a couple of different times, yelling down to my now-frozen-friend, “This is the best pitch I’ve climbed this season!”. It still makes me smile to think of it. 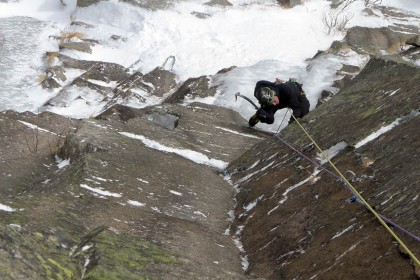 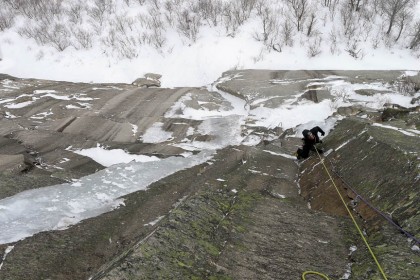 The next pitch was pure class; an iced up crack, a bombay chimney and a dry crack offering great protection, depositing us at a sunny and spacious belay ledge.

Pitch 3. I have always wanted to climb this bombay. 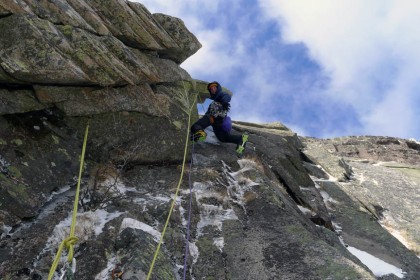 A happy climber about to do something he has always wanted.

A quick ramble of a fourth pitch rejoined Quartet in the snow fields leading up to the dreaded M7 choss pitch, and another trip to the top; this time before the sun set (my first non-benightment in two weeks). 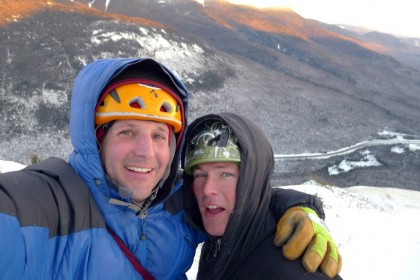 The unfinished final chapter of this story is this. I thought we had just climbed Icarus, but unsure, called it Daedalus (Icarus’s father and the most closely realated name not already taken from the story of Icarus’s fall). Just this morning I took a look at some of Rick Wilcox’s old pictures from 1974 which made it look like Icarus was done as an all-free-winter route last March by Kevin Mahoney and Elliot Gaddy, who added a direct finish, just a couple of days after they topped out on the Ghost Roof. Jon Sykes’s guidebook seems to suggest that the summer route Rodan (freed by Jim Shimberg and Bradley White) follows the same line as Icarus. That line is, at this point, still blurrier than I drew on my topo. Somebody placed that 1/4 bolt I used for a belay two or three corners south.. I’m just not sure who. 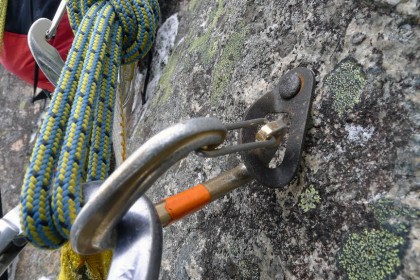 Did you place this?