Over the last few months, we have worked hard – and thought even harder – about if and how to reopen Cathedral Mountain Guides and how to get back to climbing in the places we love with the people we care so deeply about.  Most importantly, how to do so responsibly.  And now, finally, we’re happy to say that we are ready!

It is going to be different.  There will be face coverings when we share a tight belay stance, there is a health form that you will have to fill out (twice…), we’ll have to drive separately to the crag, sanitize our hands throughout the day, our gear once the day is done.  And the list goes on.  It’s a lot to ask, we know, but we already ask a lot of each other in a day of climbing.  We are partners out there on the cliff, literally taking each other’s lives into our hands.  This is just one more move along those same lines; one more instance where good planning and good communication is key to a successful day in the mountains. 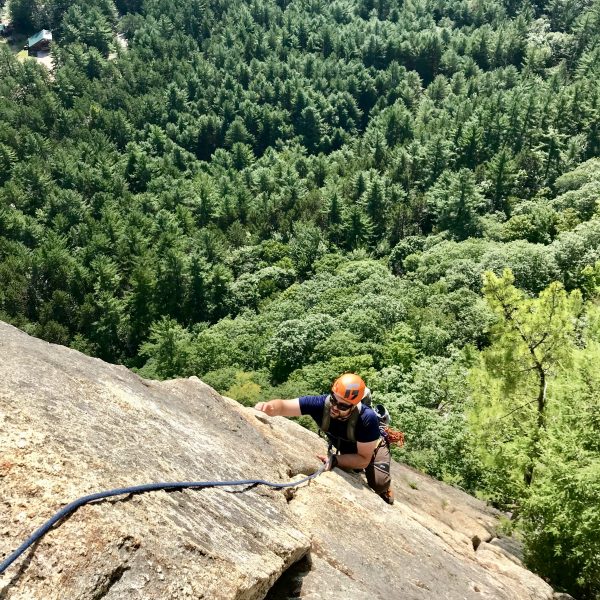 The responsibility of minimizing the risks associated with climbing during a pandemic is shared between guide and guest.  The only way we can do this is with your help.  Together we can move forward to climb again, to teach and learn again, and to be on those brilliant New Hampshire rock climbs once again.

So if you are ready to get out climbing, we would love to be out there with you.  Know that the safety and well-being of our guests and guides remain our top-priority.  We pledge to take this risk seriously and to remain vigilant as we navigate an ever-evolving situation.

Please check out the nittier, grittier version of our Climbing & COVID-19 response and don’t hesitate to contact us with any ideas or questions you may have.  As always, we’re here to fine-tune the day(s) to meet your goals and needs.

As the promise of warm weather and dry rock combines with the pent up energy from hunkering down for the last 10 weeks, a lot of us are beginning to venture back out to the crag.  Dipping our toes in the climbing waters feels strange… but really good and grounding… but also a little strange…

Is this the right thing to be doing?  Are we being responsible to our community?  Are the risks worth it?

The questions weigh heavily and everyone is likely to answer them a little bit differently.  Ultimately, for me, I have decided that it is worth it.  The level of personal risk is acceptable and the risk of exposure to the community is low.  It definitely feels a little weird and it is hard to add so many rules and caveats to something that I was first attracted to because of the freedom I found in it.  However, I’ve been adapting, trying my best to figure it out, and adjusting as the times change and the understanding of the situation improves.  Flexibility seems to be key here, and just like everybody else, I’ve been rolling with the punches.  This is as true in climbing as it is in day-to-day life right now. 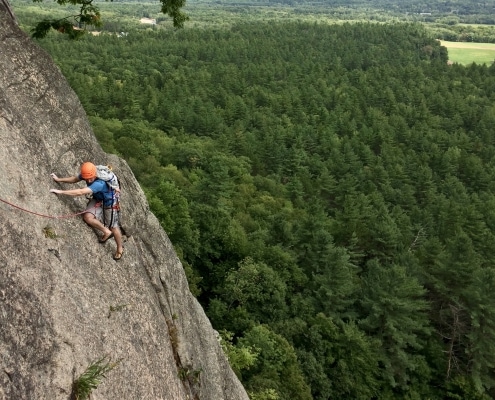 For what it’s worth, here are some of the things I’ve been thinking about as I make my decisions surrounding going climbing:

If you, too, begin to grab the rack and head for the crag, please do so thoughtfully and responsibly.  Check in regularly with the current regulations regarding travel in your area, as well as wherever you plan to climb.  Be conservative.  Be flexible.  Stay local.  Wash your hands.  And remember that sometimes, making the right choice means staying home.

And while you’re thinking about it – check out these resources from the Access Fund and the American Alpine Club. 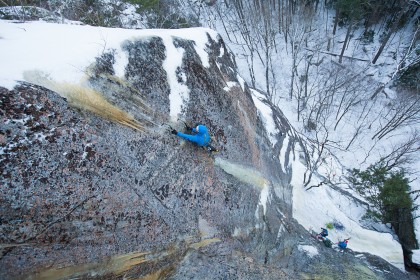 What happens when the ice runs out: scratching around on Cathedral Ledge, December 2014.

I never know quite how to approach the early season. One year I started it off with a mellow romp up an area classic – Shoestring Gully – with good friend Elliot Gaddy. Thinking that got me dialed in, I then flung myself at some hard mixed pitch. Whoooa. That kinda backfired. Since then I have tried to take the same tack that I like for climbing trips – hurl myself at something challenging just to get the shakes out. I don’t like having something hanging over my head, best to just deal with it.

With winter climbing there is the added push of the fickle conditions. For our first pitch of this season, Sam Bendroth and I scrapped our way up Karen’s Variation on Cathedral Ledge to get up to some cool looking ice above the Blueberry Terrace. This was Peter Doucette and Ray Rice’s route, Cryo-Kinesis, which they pioneered a few years ago.  Water was moving pretty heavily up there, so, in an act of unprecedented restraint, we decided to come back the next day after it had a chance to build a bit. 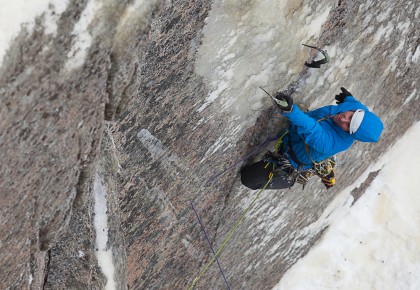 Bayard channelling his inner Jedi on the thin-ice start to Cryo-Kinesis.

Overnight was too cold for optimal building conditions, but the ice had sured up some. After a morning of work we took the fast track up, hiking to the top of the cliff and then rappelling in. I clipped a nut I had placed the afternoon before, right off the ledge, and started up some thin little ice bubbles. It was…scary, but I managed to find gear and keep myself on the wall – for a while. Lots of awesome climbing culminated in a less-than-shoulder-width-pillar.

Everything went pretty well until I was about to launch into some pumpy, gently overhanging dry-tooling above the pillar. While placing a Camalot, my tool shifted and I went flying – fall #1. Once back in location at the top of the pillar, I tried a straight up version, which resulted in fall #2. Finally, now fully pumped, I saw the obvious line of holds out left. Ahhh.. that was the way, but i was pooped.

Stellar line Ray and Peter! The top out – swinging into sticky yellow overhanging ice – would have made a true send so sweet. 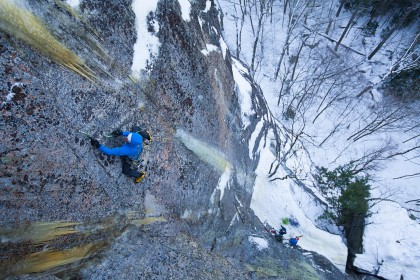 Alas, the finishing moves are longer and pumper than one would have hoped.